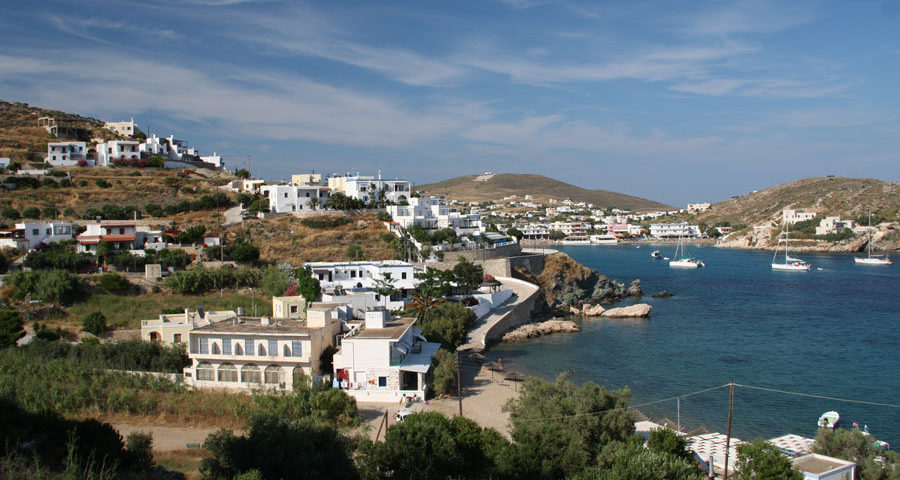 Vari is 7km from Ermoypoli and one arrives here very easily with the Shuttle Bus at about 20’ or with your own rental car. It is advisable to arrange for a rental car from Hermoupolis, as there is no office to rent a car (rent a car).

Vari is the largest and oldest village of Syros. A touristic and mainly rural village with 1451 inhabitants, according to the 2001 census, uninteresting, but very picturesque, mainly because of the wonderful Goulandris’ family tower mansion, located on one side of the bay.

At the peninsula “Hondra” the oldest settlements on the island (4000 – 3000 BC) were found. At the sheltered sandy beach with the calm waters ( that rarely catches waves as it is very well protected from the north wind), you can find umbrellas, two taverns, and water sports. Throughout the summer various cultural, artistic and sporting events are organized, offering entertainment and a pleasant touch to holiday vacationers.

The village of Vari has a beach that rarely suffers from the wave. The bay of Vari is closed and there are restaurants, cafes and hotels by the sea. It is an organized beach.

Shortly after Vari, you will reach Achladi beach with trees, umbrellas and fishing boats. There is also a tavern.

You will find this beach on your left, just before you reach Vari. It is a relatively quiet beach, with pebbles inside and out. You will reach there by a narrow asphalted road, which becomes soily towards its end.

In August, in Vari are organized “the August Days” by reviving old customs and forgotten trades and creating elaborate structures on the sand. The festivities culminate with the stunning Venetian night, with the participation of residents and visitors.