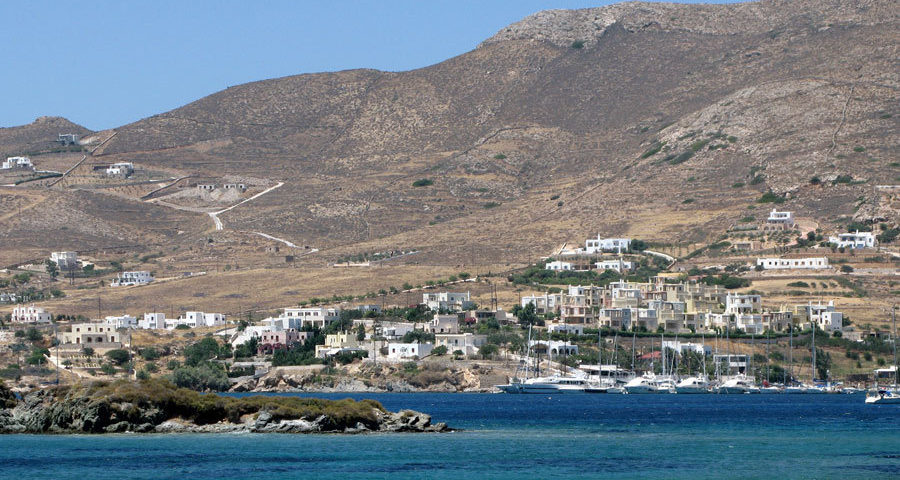 Tweet
At the southwest end of the island is Foinikas. The bay of Foinikas is 12 km from Hermoupolis and 5km from Galissas and you can get there by bus in about 40 minutes or by rental car, making a superb beachfront stroll of the island coming from Hermoupolis. If your destination is Foinikas and you plan to rent a car, you should better do it in Hermoupolis, as there is no rental car office (rent a car). So starting your journey from Hermoupolis with your car, you will pass by Azolimnos firstly, then you will see the picturesque Vari, Megas Gialos, the green Posidonia with its towers and villas of old times, you will pass from a short distance by Agathopes and you will end up in Foinikas.

Foinikas is a large agricultural, fishing and tourist village, harbor of the Phoenicians thousands of years ago, from who it probably took its name. It spreads in a cove sheltered by the winds, with a harbor where fishing but mainly tourist boats anchor. It has small beaches and a bigger organised beach, beside the road, with water sports, hotels and shops.

The morphology of the bay makes it able to perform all kinds of water sports. Indeed, during summer, there are sailing regattas, while in the past National Games were conducted.

On the islet “Psachno”, located on the edge of the bay, they have found traces of the Cycladic civilization, while in the area there are also traces of classical and Roman antiquity. Nearby, to the northwest of Foinikas you will discover the most peaceful small beach of Kokkina.

It is a small beach with sand outside and pebbles inside. It is located just outside Foinikas village, but it is better than the beach of the village