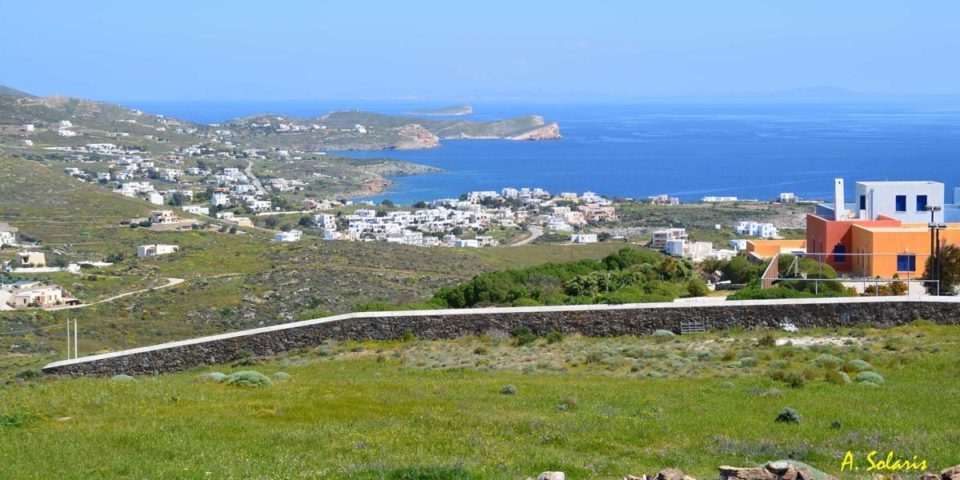 Summer resort on the southern side of the island stretched around a deep bay, with an organized sandy beach sheltered from the usual north winds of the Aegean.

The multifarious shore of Megas Gialos offers spectacular views and is difficult to believe that the region was one of the old, not just underestimated but really undervalued of the island. The change was made after the opening of the coastal road that developed the region and today summer houses, hotels, apartments and rooms extend to the entire length (approximately 4km). At the end of the road, lies the village center, which has a wonderful beach where you can find very easily a shady place, as the trees are numerous and almost touching the sea.

On the right side of the bay, over the little jetty, dominates the newly built Orthodox church of St. Anthony. On February 17, there is a festival where bean soup and wine is offered. In the same church it is also organized the feast of St. Thalassini during summer. To the left of the beach and just before the central bay is the Catholic church of St. Thekla.

Megas Gialos is famous for the three festivals held each year and are well-known for dancing, drinking and plenty of partying till morning.

The settlement of Megas Gialos has many hotels, rooms and a clean and organized beach, with crystal clear water and trees that provide coolness. You will not find rental car offices (rent a car), cafes or mini markets, but will find taverns and will be serviced by a super booth located on the beach.

Just a little further from the beach of Megas Gialos. It is an almost secluded beach with sand outside and “plates” in the sea, trees for shade and a tavern, thus creating an ideal setting for relaxing and diving in the turquoise waters of the Aegean. From the beach of Megas Gialos you will arrive here within 15’ of walking or if you have a car or rental car from the main road to Finikas and 500 meters to your left.