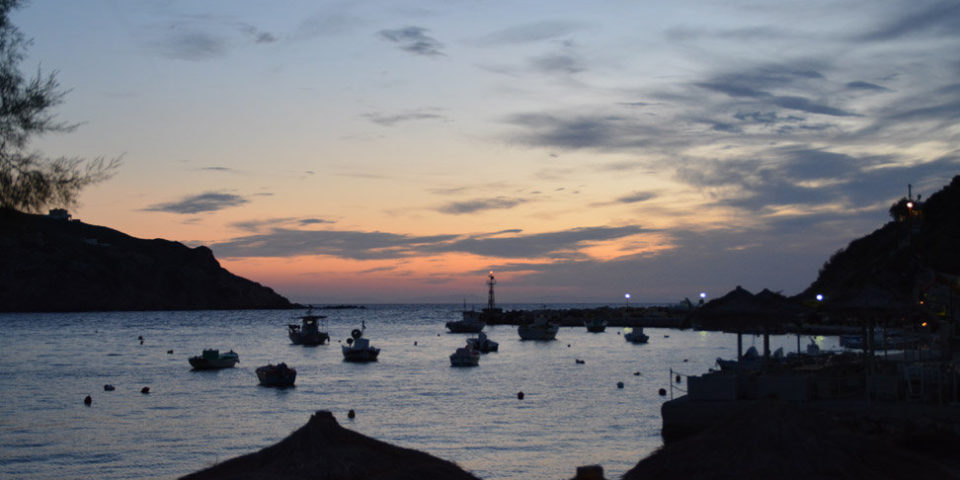 Kini is located at a distance of 9km from Hermoupolis to the West side of the island. Anyone can visit the village by bus, taxi or rental car. In the case of Kini, rent a car seems to be the best solution, as from there one can visit the nearby beaches of “Lotos” or “Delfini” that cannot be reached by bus.

The picturesque seaside village of Kini evolves with mild pace into a tourist resort. In the harbor anchored fishing boats, while it is famous for the breathtaking sunsets it offers to its guests.

The village has also a Fishing Boat Museum of Aquatic Life and Shellfish. The aquarium that has been operating for a few years in Kini is a little surprise for visitors coming to Syros that would not expect to see something similar.

During the year enough festivals take place at Kini with most important that of Agia Marina (July 17th), when the small church situated north of Kini in the middle of the hill Stonycha celebrates, and St. Peter (June 29th) when the chapel located to the north side of the beach celebrates. The icon of St. Peter is wandering by a fishing boat on Kini Bay, which is accompanied by other flagged boats. In these festivals marshmallows (loukoumia) are offered, as well as drinks, masticha and brioche.

At the developed beach you will find cafes, restaurants and taverns. On the right side of the bay you will see the church of St. Nicholas stuck in rocks. If you walk a bit longer, you will find yourself in the quiet beach of Lotos. It is a small beach with sand and pebbles, 1km south of Kini village. It is a very good option when south winds are blowing that clean the sea. It has trees for shade.

The dirt road that starts from the village leads you to the next bay, where the beach Delfini is situated. The road is narrow, so you will have to go very slowly and carefully, regardless of whether the car is yours or rented. Delfini is a nice beach on the homonymous bay. The pebbles to the left of the beach make access to water difficult, but at the remaining part of the beach you will find a lovely sandy beach. Some time ago, the beach was even quieter, but the road that was opened brought many people. In front of the cafe – bar tavern Delfini are a few umbrellas and sunbeds.

By boat from Kini or with your own boat you can visit the four pristine beaches Barbarousa, Aetos, Lia and Grammata or the smaller ones of Megas Lakos, Marmari and Avlaki. None of the beaches has any umbrellas or taverns.

In sandy Varvaroussa stop several sailboats. In the sheltered Grammata you may encounter fanatics of free camping under the trees. On the nearby rocks are carved inscriptions from the Roman and Byzantine era that the beach Grammata was named after. These were prayers and thanks of castaways, who found refuge in the sheltered bay.

By walking you can visit these beaches from the northern side. Two paths lead to Lia (30 min) and Grammata (1 hour). Also from Delfini beach you can hike down to the beaches of Varvaroussa, Aetos and Avlaki